Sozialistische Selbsthilfe Mühlheim (SSM) is a self-organized residential and work project, which evolved in the wake of a squat in an old Schnapps distillery in the Mühlheim district of Cologne, Germany. After negotiating with the city of Cologne for four years, SSM signed a rental contract for the distillery buildings. It took the legal form of a Verein, an association controlled by its members. This arrangement has given SSM some assets that it can use to generate revenues to sustain itself. It rents out one part of its hall for events, for example. And since one of SSM’s activities is liquidating households, another part of the building is used for furniture storage. The project also runs a secondhand store. The group has always taken pride in not becoming politically or financially dependent; it began without any supporting funding and is financially self-sufficient today.

SSM cares about self-determined living, learning and working as a way to unfold the potential of each human being. SSM is especially concerned with dignifying life for those "considered worthless" in capitalism -- the unskilled, mentally ill, the unemployed. 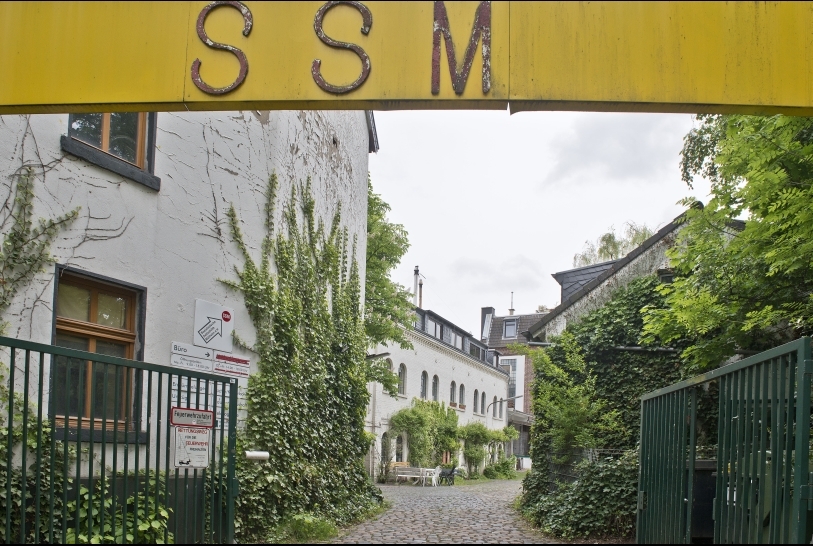 »... every one of us has his or her own room or apartment. We do not have a boss. ... We earn our living with our van by moving people's households and clearing up old apartments. If furniture and other discarded goods are still in good condition and are not needed by us any longer, we sell them in our second-hand shop. Self-sufficiency is a very important issue in the SSM.« (Weinhausen, 2003)

In 2017, SSM consisted of about 30 people, including children, who share four buildings on the old factory site in a modest neigborhood near Cologne. When it became clear that the site could not shelter all its members and activities, SSM in 2016 started to build its first new apartment building. The group's use of the term "socialist" refers to the direct socializing the means of production, namely capital, land and labor.

It is worth quoting the statutes pdf

For understanding the scope of SSM it is important to note that most people who join the project were relying on basic social transfers after falling out of the "the economy." As a SSM member put it, "When they needed something, they went to the authorities, where they had to do a lot of paperwork and adapt to the authority's conditions. In SSM, when they need something, they just take it." This requires a mental shift, which in turn requires a long (and usually slow) learning process.

Social exclusion is a French term. People were excluded from the social process, as they were in Germany with Agenda 21 (wiki

). This is the way economists and politicians created a class. A process that is said to be natural. But it isn't. It is not the economy that is wrong, it is the dominant economic thinking. It is not natural to exclude people! It is not inevitable. Believing it is natural is the religious kernel of mainstream economy. (Rainer Kippe)

As an organization, SSM's legal status is an "eingetragener Verein e.V." in form of an "Idealverein." This means that it is a civil organization that cannot pursue economic aims such as profit, but it can still engage in economic activities. The law allows for a so-called "Zweckbetrieb" -- an enterprise whose economic activities seek only to finance the purpose of the organization. Registered civil organizations, under German civic law, allows for more types of socially minded activities and are easier to manage than cooperatives or "gemeinnützige GmbH" because ___________[??] [NOTE TO DAVID. THIS IS VERY INTERESTING IN TERMS OF PATTERNS OF PUBLIC POLICIES; I NEED TO EXPLAIN THIS TO YOU] DB: We need to work on this.

# When did it start

from its founding in 1979 until 1986, when SSM became a separate, independent organization.

# How do they work

As a co-living, co-working space, SSM combines self-managed paid work for the larger community with mindful living, social service, and cultural transformation." Two members describe both the history and the spirit of the SSM.

The apartments here are all reconstructed, expanded and maintained by us. We saw the wood for our ovens by ourselves and mostly we find our clothing, furniture and equipment for our households amongst donated goods or leftovers. From Monday to Friday we have lunch collectively. The term »work« is used for all matters which are important for the group - not just for moneymaking. That means not just the moving of households or selling of goods is defined as work. Even the care for children is work, as is someone who is sweeping the court, planting flowers or being com- mitted to a citizen's initiative. We call our concept »new work«: Every one of us shouldn't just earn money, they also should show their social commitment by engaging themselves in the borough or in other new projects. (Weinhausen 2003)

We don't expect any Olympic performances, but we expect that each member integrates themselves according to his/ her possibilities. (Weinhausen 2003)

Income for SSM projects is generated through: 1) a secondhand shop; 2) an eBay shop html

; 3) refurbishing and selling old furniture at another site html

; 4) a flea market where toys, games and clothes for children can be resold three times a year.

What is not needed for individual, daily consumption is being invested in the commons.

- SSM doesn't apply for public funds because it wishes to preserve its independence, but it does accept public support. That said, sometimes "informal agreements" with authorities are needed to sustain SSM's work. - SSM strongly relies "on gifts and leftovers" to support its work and living, it cultivates the idea of new work. - Affordable rents and cheap infrastructures are key for SSM. Because the City of Cologne is renting the four buildings on an old factory site to SSM at a low price, it can live and work there in a self-determined way. However, authorities benefit from this arrangement with SSM because the group helps people learn to work and live independently and not require social transfer payments. - SSM partners with an organization called Mach Mit, which collects money for SSM's first own construction - Money comes mostly from other people or friends. The money raised can only be used to Finance Commons Provisioning, i.e., as investment, not for consumption. This rule proved to be "very, very important". So donations are exclusively earmarked for investment regardless of its source.

- Reflect on Your Peer Governance.

The weekly conference (on Wednesday) is ... the second part of what we call "Basisdemokratie". In English they call it "grassroots democracy", but it is not, as the English expression suggests, a modern modic "in"-play of hippies and green-people. It is rather based on old germanic, galic an slavic-peoples-democracy which still persists in many communities up to the Kanton level in Switzerland. This is what we understand by 'representation', not the English and French-born "parlamentarism". "Basisdemokratie" is the source of democracy and should be practiced as far as possible.

- Cultivate Shared Purpose & Values. There are regular plenary meetings -- "the big Wednesday discussion" -- and daily meetings and informal conversations to deal with all kinds of issues and conflict resolution. - Ensure Fair Abundance. Anyone is allowed to join the group regardless of his or her level of education. Disabled people are welcome. In 2003, two mentally disabled people lived in SSM. In 2017 [? RAINER?)

- Strengthen the Nested-I - Decouple Giving & Taking. This is a common practice at SSM not only within the project but also beyond it's borders. For instance almost all the wood they use for heating is a gift to the project. - Practice Gentle Reciprocity. Within SSM transactions are negotiated, flexible, adapted to specific contexts and needs. This also extends to work outside of SSM. If people want to participate in the SSM flea market, for example, [DB: I don't understand the rest] where can contribute or 6 Euro to SSM or "sheetcake."

- Honor Care. No one at SSM has to do the same tasks the whole week long. People regularly change their fields of work and do what s/he is really interested in. This rule is valid for people of all social backgrounds, ages, and especially for people who have been pushed to the margins of society. - Deepen Interdependency on Nature

At SSM, there is a focus on helping people discover and develop their potential based on a contextual learning process. As one SSM member said:

...to study further arises from various motives and through all kinds of ways in the SSM. When someone creates and cares for a garden or equips a rehearsal room for making music, there is always passion and interest for this work. On the other hand, there are the requirements and self-determined aims of the Group that involve further development of the skills of each member. ... This is accomplished in many different ways and everyone is free to decide on their own method. Reading books or asking friends for their advice or taking a course on how to do things is left to each individual to decide. Some also have done an apprenticeship or studied before they joined the group.