Change with us not only the source of power but also the power industry. Towards the common good, instead of shareholder value.

Klimaschutz+ encourages local and individual mini-investments in renewable energies and all kinds of related projects at a global level (solidarity redistribution -> climate justice). The organization was explicitely set up to Direct Capital to Commons Provisioning.

Klimaschutz+ offers people opportunities to simultaneously address climate change, fight violent culture, and work for a fair share for all. Its ultimate goal is to develop "sustainable societies." The three fields of action are considered a "conditio sine qua non" for reaching "true sustainability" and "sustainable societies."

Klimaschutz+ strives to prototype structures and tools which advance the logic of sustainability. According to the founders sustainability includes the commons.

Klimaschutz+ is based in Germany, Europe. It has transnational impact by design.

There are two interconnected but independent legal forms. The first, Foundation Klimaschutz+, actually it isn't a foundation, but an "eingetragener Verein." The second entity, a registered cooperative (in German: eingetragene Genossenschaft), is a small organization of a maximum of 20 members. It carries out the economic activities. (See also: Klimaschutz+ Peer Governance)

The organization was founded on October 10, 2010. But the idea was born in 2008, when Klimaschutz+ founders participated as "Schülerfriedensbüro Heidelberg" (Students Peace Bureau) at the Nobel for Peace World Summit, wiki

A Foundation for Climate Protection, Equity and Peace. source

Citizens contribute freely. Not only, but basically money and they decide in an open deliberative process how it will be spent. For doing so they use the infrastructure and platform set up by Klimaschutz+, which has the legal responsibility to ensure that the money is really spent for climate protection in ways that advance the organization's purpose and values.

The idea is that each person is invited to invest in a sustainable future by investing one cent every day into each of the three issues: renewable energies, poverty alleviation, nonviolent culture. 3 cents a day equals 11 Euro a year.

Once the money is collected, it is assigned to specific projects in Germany and abroad suggested by the people themselves. Projects in Senegal, Kenya, Tanzania and elsewhere are being supported. The collective decisionmaking of the donors/"mini-investors," is often done online [@PETER IS THAT TRUE AND HOW EXACTLY?]. This is how funds are assigned to specific civic initiatives all over the world. In each case, there must be an advocate (Fürsprecher) who takes responsibility for a given project.

As a platform, Klimaschutz+ is designed to Rely on Distributed Infrastructures. The infrastructure is set up by a small team; they (and the platform) connect people and ideas.

Not 'everybody' can take part in the decisionmaking process. However, the hurdles for becoming a stakeholder and decisionmaker on one or more Klimschutz+ projects are very low. Anyone who has contributed 3 cents per day/11 Euro per year and whose contribution has been assigned to a certain project/fund, has the right to join in decisionmaking about that project.

Anyone can propose a project (and therefore set up a "project fund" or "team fund"). People have suggested and carried out projects for renewable power plants and environmental education, among others.

Klimaschutz+ is the first entity in Germany to offer options that integrate renewable energy with the Solidarity Economy, as a package. One way to do so is helping people switch their power-provider (see image below). 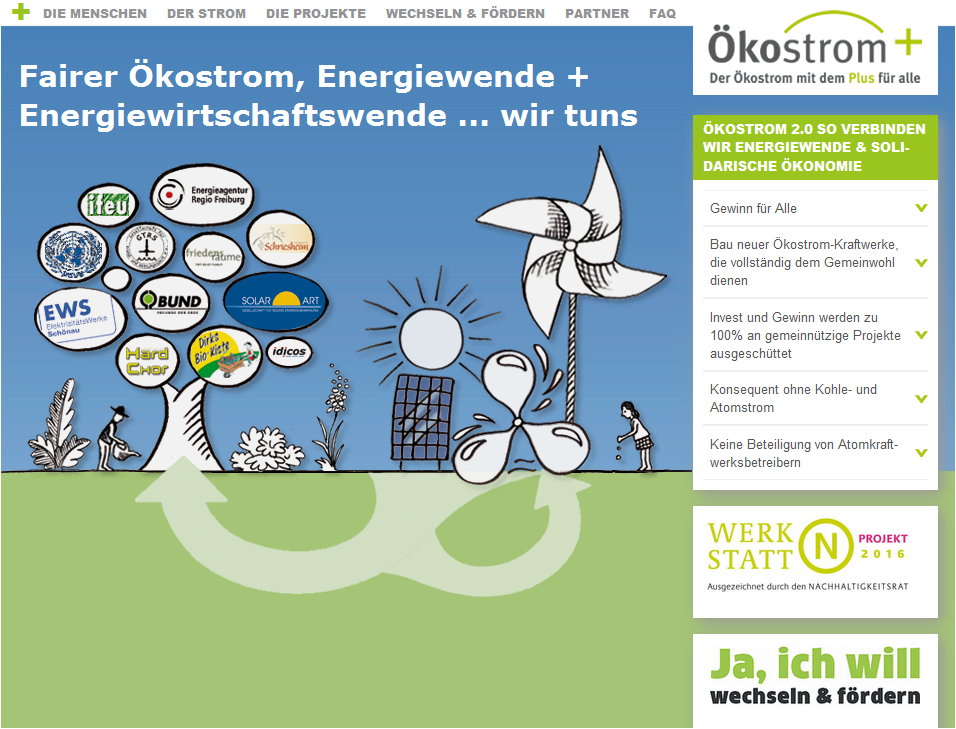 # Klimaschutz+ in Numbers - 5 facilities for renewable energy production set up - 1 foundation founded (for general Klimaschutz+ projects) - 9 local civic funds - 9 so-called "team funds" and 7 more in the course of formation @PETER: WHAT IS A CIVIC FUND AND A TEAM FUND, AND WHAT IS THE DIFFERENCE? ALSO: ABOVE WE'VE USED "PROJECT FUND"; is this also different?

). Another 55.000€ had been donated by Grameen Social Business Investment html

State funding is accepted only if it does not conflict with Klimaschutz+ own stated social and environmental purposes.

Klimaschutz+ activists would say, we don't Beat the Bounds, we push them further. Boundaries aren't rigid. They can be widened

"using existing law creatively for our purposes. There is no clear boundary we have to respect. As a learning organization we are constantly questioning boundaries." Peter Kolbe

The core idea is that structural changes in the economy will contribute to Beat the Bounds. If, e.g. there is no incentive for profit making, if profit-making doesn't make sense anymore, certain boundaries won't either. How these incentives are being removed? See: Klimaschutz+ Peer Governance

Klimaschutz+ offers a platform to leverage many similar structures to be created and make use of it. Klimaschutz+ inspires and supports others. The city of Frankfurt and its Climate Protection fund, for instance. Solidarstrom Bremen, has emulated the project's ideas.[PETER ANYTHING ELSE OR MAYBE MORE CONCRETE?] This is a case of Emulate & Then Federate, which could be called 'Inspire, Emulate & Then Federate."

Our ideas are not copyrighted. Whoever wants to make us if them and set up such a structure is welcome to do so. (Peter Kolbe)

For the State to Provide Mediation & Support if Needed, to Finance Commons Provisioning and to Strengthen Commons Public Circuits are considered key political demands. DB: THIS SENTENCE CALLS FOR ELABORATION. WHO IS MAKING THESE DEMANDS, AND WHAT SPECIFICALLY IS SOUGHT? AND WHAT IS MEANT BY 'COMMONS PUBLIC CIRCUITS"?

I am part of the State. We all are. To separate commons and state is problematic. Our default position is to recognize that we have a historically grown structure [the state - SH], which we need to change. Peter Kolbe