Guifi·net is a cooperative in Barcelona, Spain, that provides crowdsourced infrastructure for high-quality Wi-Fi service. By committing itself to principles of mutual ownership, net neutrality and community control, Guifi.net has grown from a single Wi-Fi node in 2004 to more than 34,000 nodes in 2017.

Guifi.net is committed to "creating a free, open and neutral telecommunications network based on a commons model" (html

Guifi.net is legally a cooperative, based in Barcelona, Spain. Europe bioregional

Guifi got its start when Ramon Roca, a Spanish engineer at Oracle, hacked some off-the-shelf routers. The hack made the routers work as nodes in a mesh network-like system connected to a single DSL line owned by Telefonica serving municipal governments. This jerry-rigged system enabled people to send and receive Internet data using other, similarly hacked routers, for free.

As word spread, Roca’s innovation to deal with scarce Internet access quickly caught on. As recounted by Wired magazine, Guifi.net grew its system through a kind of improvised crowdfunding system: “’It was about announcing a plan, describing the cost, and asking for contributions,’ Roca says. The payments weren’t going to Guifi, but to the suppliers of gear and ISP network services. All of these initiatives laid the groundwork not just for building out the overall network, but also creating the array of ISPs.”

Guifi.net established an affiliated foundation in 2008 to help oversee volunteers, network operations, and governance of the entire system. As Wired described it, the foundation “handled network traffic to and among the providers; connected to the major data ‘interchange’ providing vast amounts of bandwidth between southern Spain and the rest of the world; planned deployment of fiber; and, crucially, developed systems to ensure that the ISPs were paying their fair share of the overall data and network-management costs.”

Guiding the entire project are principles set forth in the [Fonn Compact], a “Compact for a Free, Open and Neutral Network.” The Compact declares that Guifi.net users shall have a number of rights and freedoms: • You have the freedom to use the network for any purpose as long as you don’t harm the operation of the network itself, the rights of other users, or the principles of neutrality that allow contents and services to flow without deliberate interference. • You have the right to understand the network and its components, and to share knowledge of its mechanisms and principles.

• You have the right to join the network, and the obligation to extend this set of rights to anyone according to these same terms.

Guifi.net has more than 34,000 Wi-Fi nodes in Catalonia. source 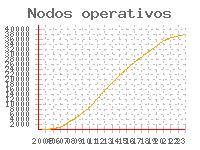 Working Nodes in Guifi.net until 2017. source

Guifi.net is financed by its users and their commitment to a shared infrastructure and mutulized benefits. Anyone who users the Guifi infrastrutrure in Catalonia – individual Internet users, small businesses, government, dozens of small Internet service providers – are committed to “the development of a commons-based, free, open and neutral telecommunications network.”

This has resulted in Guifi providing far better broadband service at cheaper prices than, say, Americans, who pay very high prices to a broadband oligopoly (a median of $80 month in 2017) for slower connectivity and poor customer service. ISPs using Guifi were charging 18 to 35 Euros a month in 2016 (roughly $20–$37) for one gigabite fiber connections, and much less prices for Wi-Fi. There are now more than 33,000 nodes in the Guifi.net system in Catalonia.

As an infrastructure project, Guifi.net does not have as much direct, interpersonal collaboration among its members/users as many commons. However, it is committed to the shared goal of mutualizing the benefits of a shared Internet infrastructure. It relies upon community support, including volunteers.

Users of Guifi.net all agree to the FONN Compact, which amounts to an agreement among users to support a free, open & neutral network. The Compact also states the terms by which people can offer their own services and content on the network. Under the FONN Compact, in Part II/1, "To implement a rewrite, consent must be expressly renewed." Thus there is an effort to Assure Commoners' Consent in Decisionmaking. While Guifi.net is participating in the market for Internet access, it remains committed to its social values and goals, and is able to Keep Commons & Commerce Distinct. One point of Guifi.net is to Relationalize Property, in the sense of making the infrastructure belong to its users. Because of this commitment, too, Guifi.net seeks to Share Knowledge Often & Widely. A concrete way to Honor Transparency in a Sphere of Trust is set forward in the FONN Compact, part II/4, which stipulates that all FONN Compact revisions "are archived and published so you can follow the update process and know the release dates of each revision. If necessary, these can be compared with the dates of acceptance of the Compact to avoid conflicts of interpretation." By using its own volunteer work and mutualizing of support, Guifi.net has found a way to Direct Capital to Commons Provisioning, a significant achievement.

Guifi.net is a classic case of Make & Use Together along with Pool & Share, but with an unusual shared resource, Wi-Fi infrastructure. Like other commons-based ventures that operate in markets, Guifi.net has been able to assert some measure of price sovereignty for the benefit of its users. It is responsive to market trends and user needs, but it does not seek to maximize or privatize market gains. Guifi.net is heavily reliant on distributed structures to meet user needs, a fact that makes it more resilient and responsive. It is also more able to Creatively Adapt & Renew because of its structure and broad base of users/supporters.

Guifi.net's work does not significantly affect the Inner Kernel.

, on Wikipedia [wiki] Panayotis Antoniadis: DIY networking: the path to a more democratic internet, in The Conversation, November 8, 2016 html